The company's production plant is a popular tourist attraction. The company was founded by Johan Jeremiassen in 1885 and has produced designs by Norwegian artists.

During his travels, Jeremiassen engaged the German ceramist Carl Maria Bauer in Gotha to construct the new factory. Bauer was a man with considerable experience in the porcelain industry. He had been conducting the construction of similar factories in Germany and Russia. He now started the Porsgrunn factory and was then employed as its first director in May 1887.

In 1886, the factory was completed and the operation could begin. The first burning took place in February 1887.

With the improved economy, the factory could also take greater promise with its artistic quality. In 1901, the Board of Representatives decided to engage Mrs Rose Martin from Copenhagen as an artistic consultant and manager of a new department for underglass painting - a department that for many years under the leadership of the wife enjoyed general recognition for her beautiful products. Mrs. Martin resigned in 1915.

Through Norwegian artists, the factory has applied artistic assistance through the years, thus at Thorolf Holmboe, Gerhard Munthe, Th. Kittelsen, O. Wold Thorne, W. Peters and others and sculptors like Heggelund, Johs. Sirnes and Thorleif Solberg. The Danish painter and sculptor Hans Flygenring was linked to the factory for some years.

As a consequence, production has gained a greater artistic value over the years - not only in the case of decorative items, but also in the case of curative appliances.

In 1928 Mrs Nora Gulbrandsen was employed as an artistic employee – a fortunate hire for the company. Her patterns and shapes have gained flattering attention, and the artistic achievements of the porcelain factory must be said to have gone through a renaissance these years.

Since 1996 the factory has been owned by the Atle Brynestad company CG Holding AS. In contrast to its prosperous history, Porsgrund has since experienced a financial decline. After years of uncertain future, adjustments have been made to increase cost efficiency, by considerable restructuring to the production and sales processes.

Thorolf Holmboe was one of the most important Artists of Porsgrund. His main effort in the Norwegian art industry lies in the works he performed in the period 1906-25 for Porsgrund's Porcelain Factory. During his early years his motifs were mainly taken from the Norwegian Flora and Fauna as well as from Norwegian landscapes. Impulses from his 20th century paintings are reflected in decorations with polar bear motifs from 1909 and later also in drafts of monkeys, elephants, zebras and kakadoes ca. 1915-1920. Holmboe usually took up Norwegian motives, but never attempted to find a Norwegian style expression based on older popular decorative art such as Gerhard Munthe and Oluf Wold-Torne. The decorations for Porsgrund porcelain factory are made in underglaze technology.

More Information on Thorolf Holmboe can be reviewed here 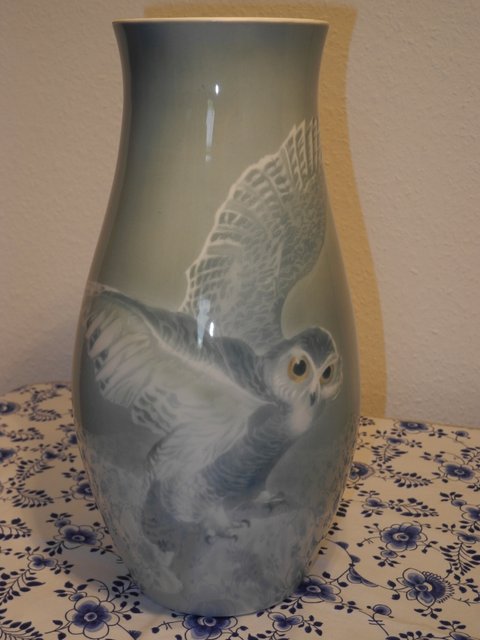 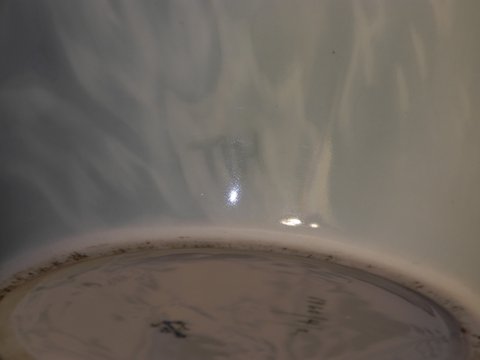 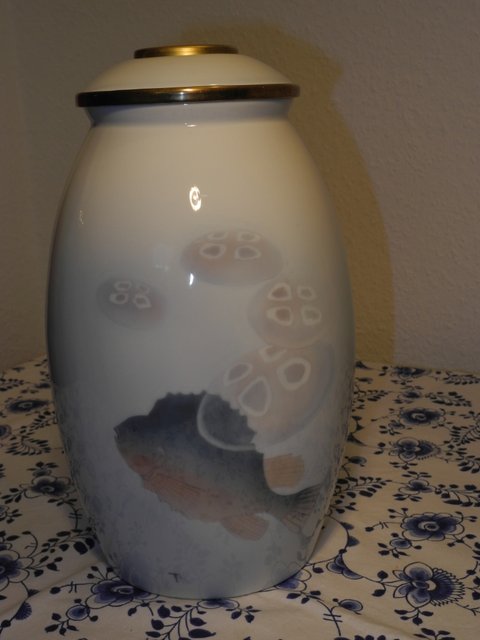 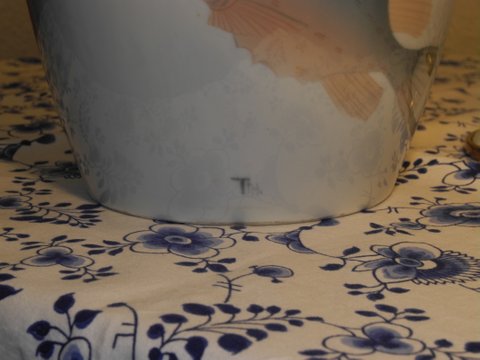 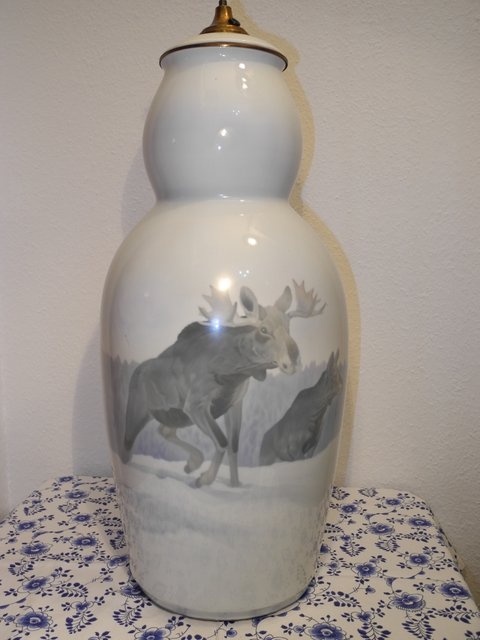 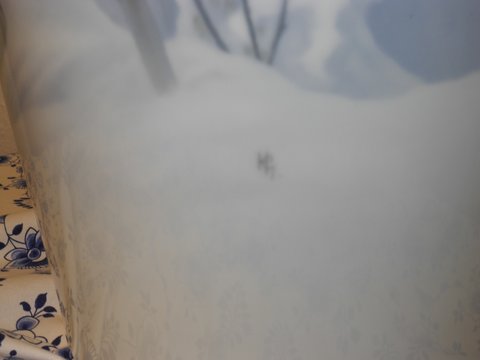 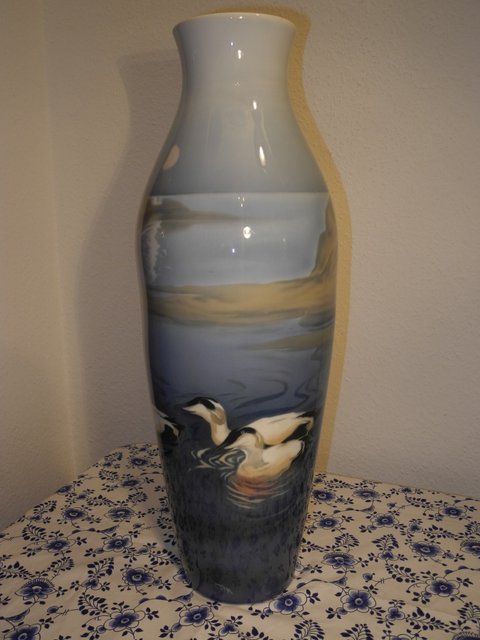 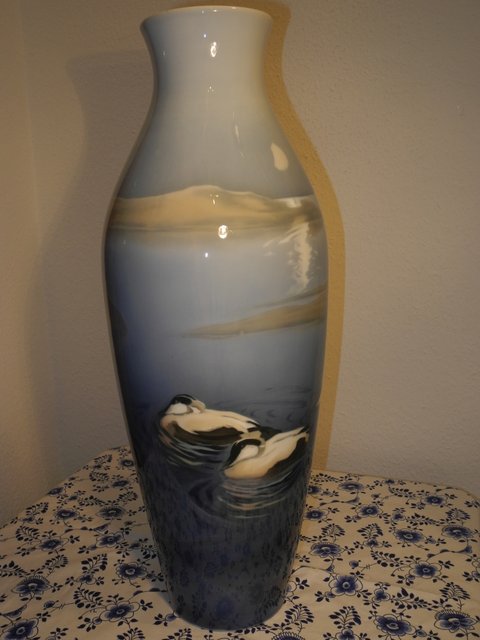 This Vase lamp is shown on page 67 of

Picture of the Porsgrund Salesroom in 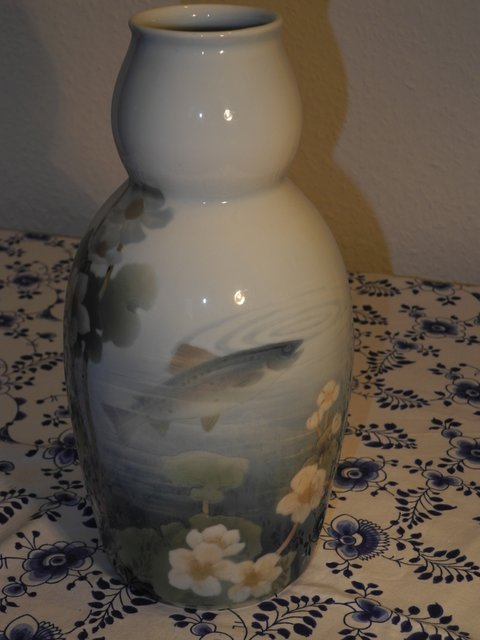 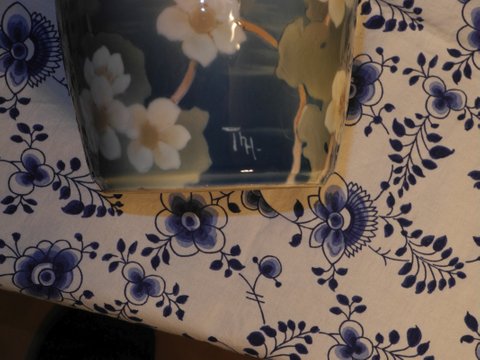 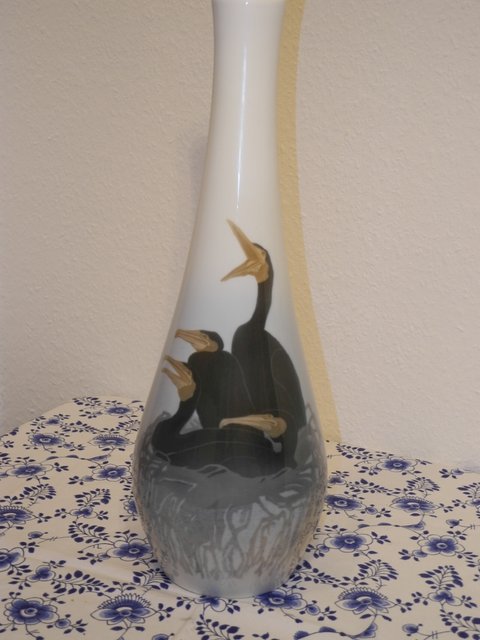 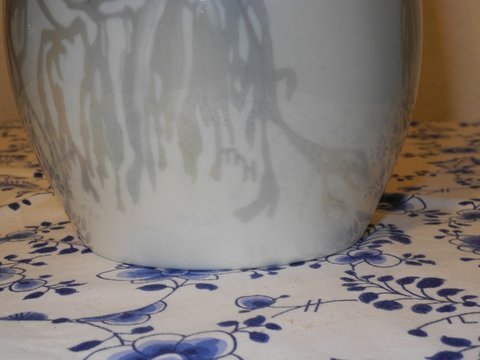 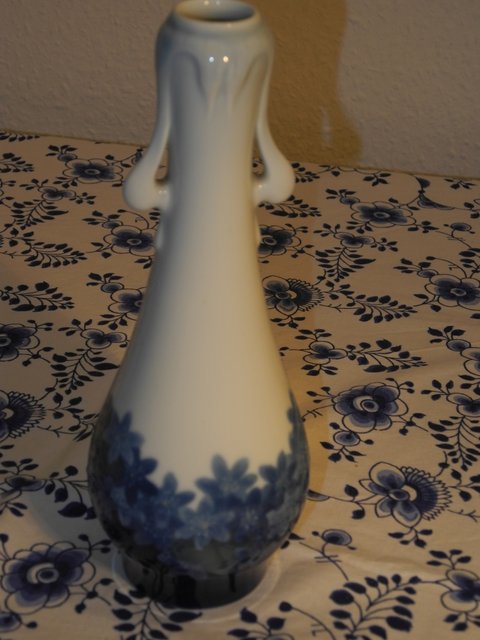 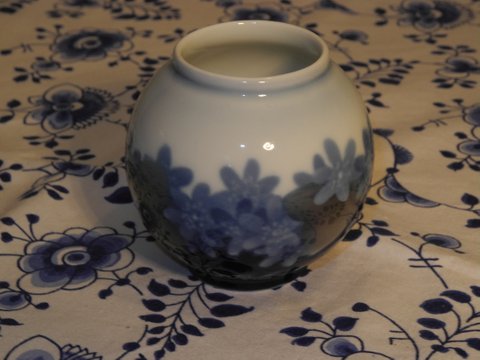 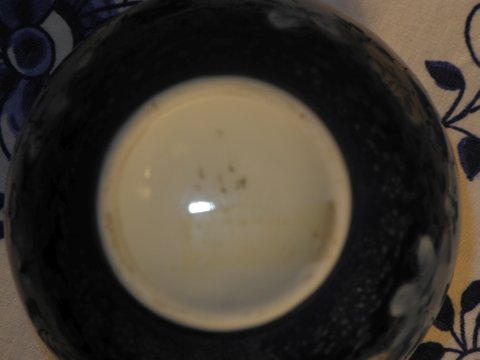 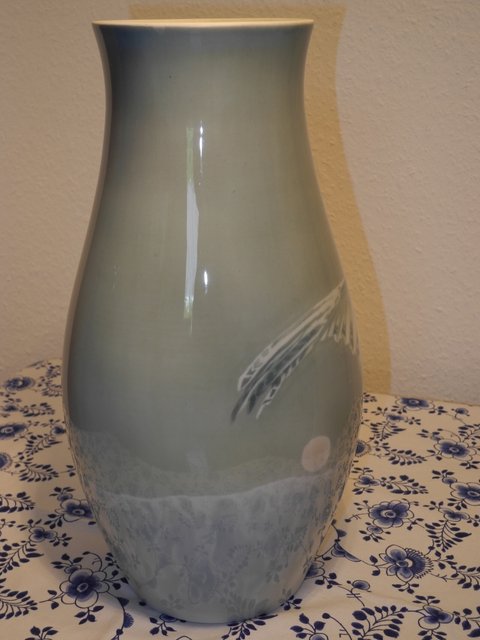 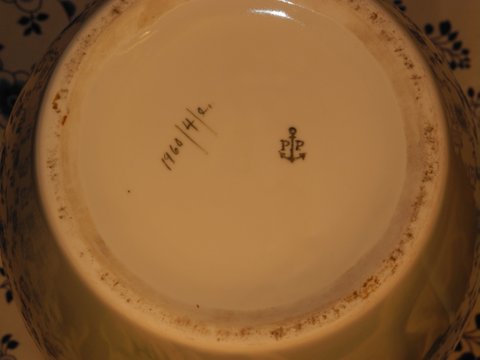 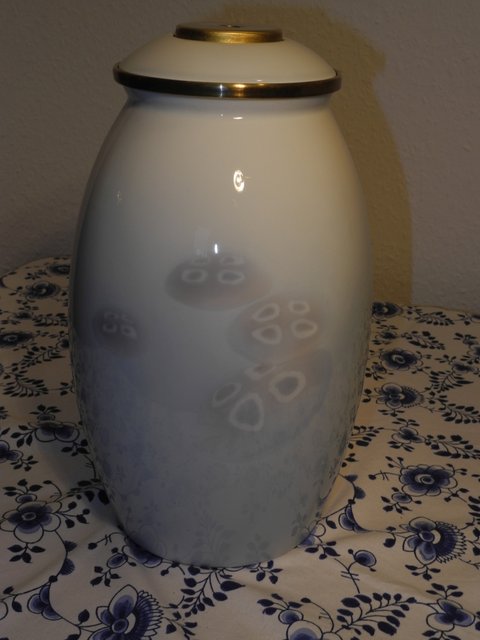 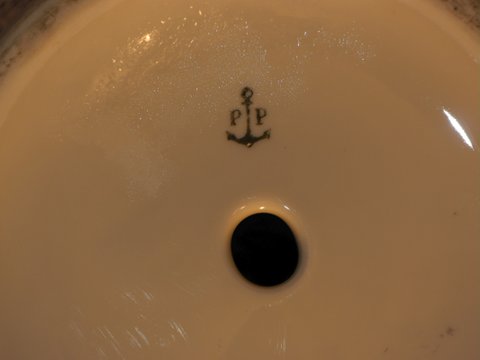 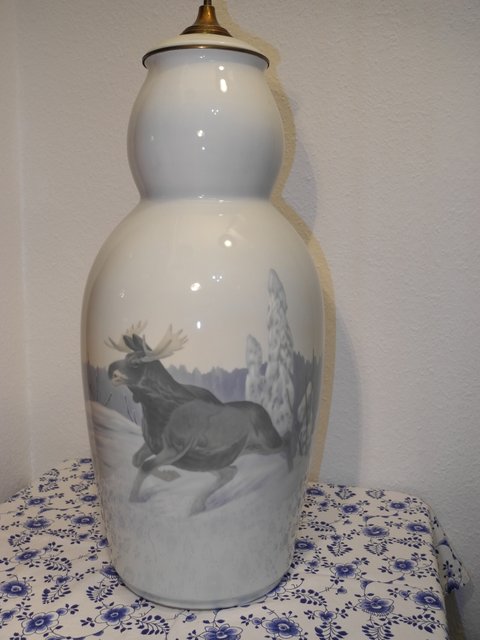 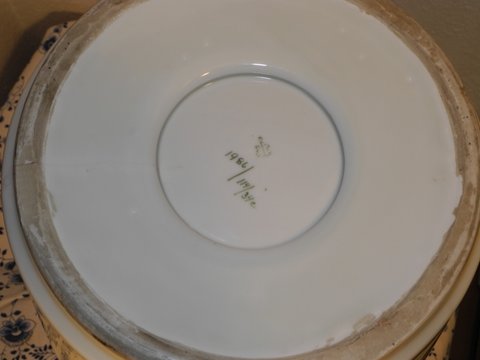 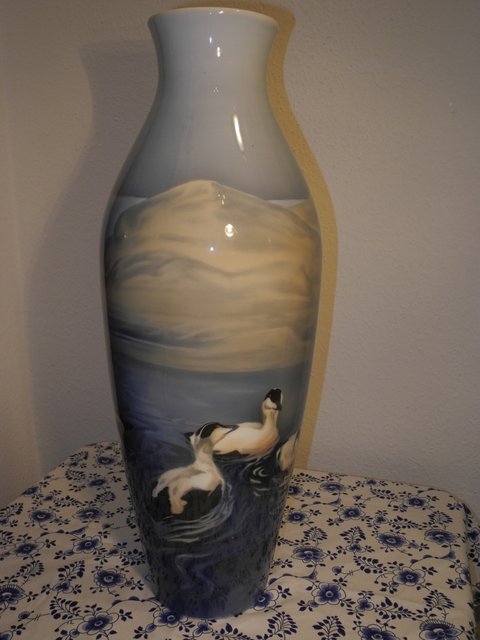 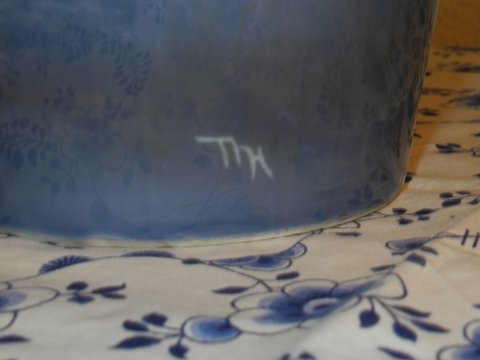 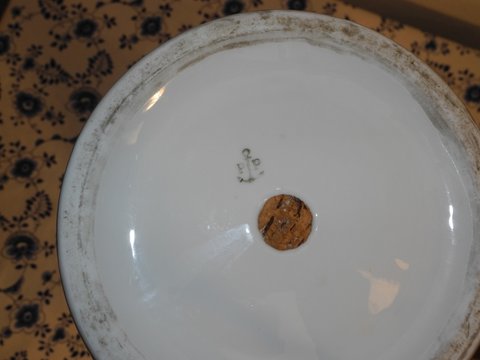 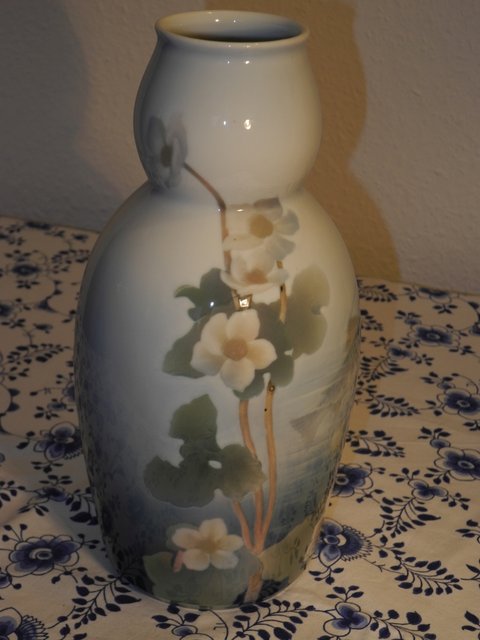 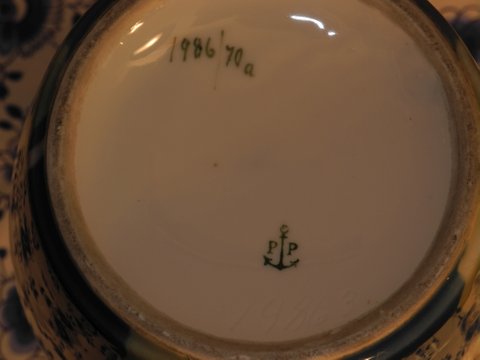 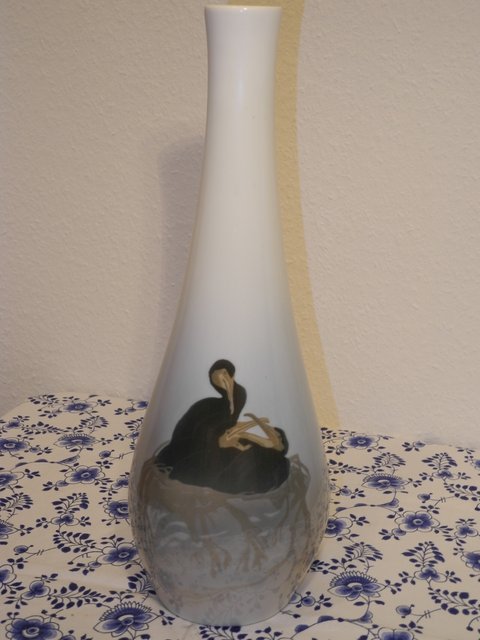 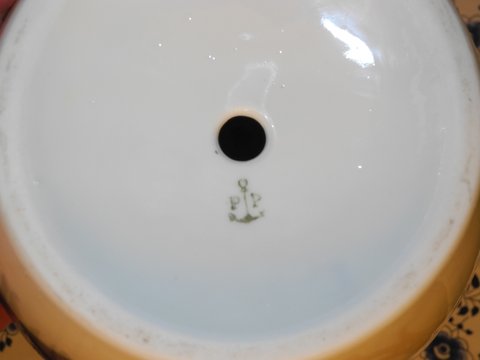 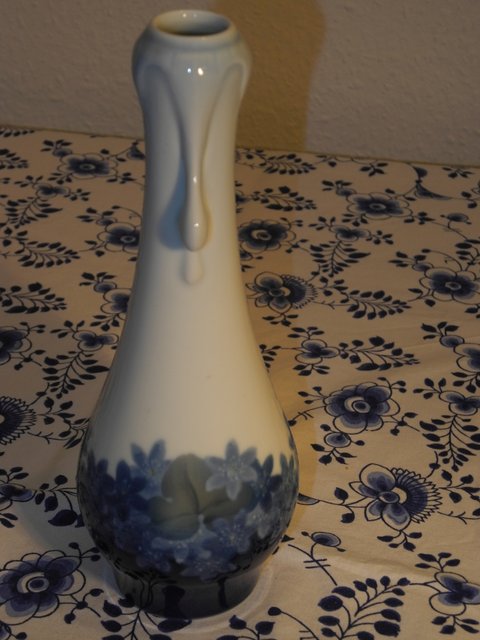 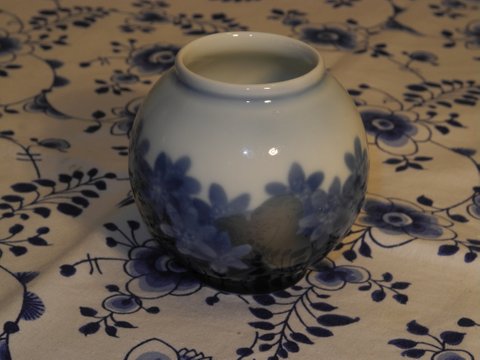